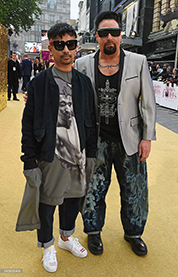 Renowned in the fashion world for their fantastical, innovative and futuristic pieces, worn by everyone from Michelle Obama, Beyoncé, Grayson Perry and Pamela Anderson, to Jo Whiley, Debbie Harry and Jane Horrocks, Vin + Omi recently achieved widespread acclaim for the many outlandish outfits they created for Bubble in Absolutely Fabulous: the movie, which was released on 1st July.

Although star of the movie, Jennifer Saunders, has attended previous Vin + Omi fashion shows, the duo were first called to help out with one of the film’s biggest technical challenges by Head of Costume Rebecca Hale. “They had a problem with one of the River Thames’ scenes,” says Vin. “Bubble falls into the water and comes up in a different garment and they were trying to figure out how that would work technically and asked for our help.”

The creative duo’s ingenious solution to the problem was to create a dress covered in 500 handmade flowers which would then dissolve to transform Bubble into an “amphibious creature dressed in latex.” The dress is part of a pivotal scene starring Kate Moss in the movie and Vin + Omi went on to design more of Bubble’s eclectic and eccentric wardrobe for the film, including an OTT hashtag outfit, to bring Bubble into the 21st century. They also designed Bubble actress Jane Horrocks’ outfit for the premiere.

According to Vin: “For our September show, we move away from the madness of film costumes and concentrate on the serious business of fashion. Of course there will be our signature OTT outfits, but underpinning this will be high end retail garments that will be showcased to the international fashion media, buyers, celebrities and public figures. This is a special show for us and we wanted it to be housed in the best possible venue in Central London.

The Congress Centre leapt out as the perfect venue to house our catwalk show; it has the right proportions, facilities, location and excellent staff. In order to have the confidence to transform a large space into a catwalk environment you really need the full support of the venue and Congress Centre’s staff have been wonderfully open-minded and supportive.”

The show will take place in Congress Hall, the largest space at the venue, whilst the Congress Suites (four interconnecting rooms next to the Hall) will be used as hair, makeup and nail rooms and for press interviews. A large backstage team of 150 is needed to prepare the 35 models and ensure that each one is looking perfect.

Ruby Chagger, sales & marketing manager at Congress Centre says: “Congress Centre is already popular with blue chip clients for large conferences and meetings, but we’ve only ever hosted one fashion show before and that was quite some time ago. We’re really delighted that Vin + Omi have chosen us for their September show as it’s going to be really exciting to see the venue transformed in such a creative way.”

For further information on Congress Centre or to book a site visit please call 020 7467 1318 or visit www.congresscentre.co.uk.

To find out more about Vin + Omi please visit www.vinandomi.com.