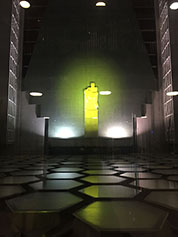 A client drinks reception held last night in the Marble Hall at Congress Centre marked the first appearance of our new-look Epstein sculpture, which has recently been meticulously cleaned. The cleaning of the sculpture, overlooking the building’s Marble Hall, was the last phase of work at the venue, which began with the successful installation of a new Eden Project-style canopy roof over the summer.

Carved from a 10-ton block of Roman stone, the statue is a memorial to victims of the two World Wars and was originally created in 1956 by the famous sculptor, Sir Jacob Epstein. It depicts a lone woman supporting the limp naked body of a dead soldier and is a memorial to the sacrifices made by trade unionists during the wars. It was officially first unveiled in 1958.

The statue takes pride of place in the central courtyard, now protected from the elements by the new canopy roof, and provides a striking backdrop for events taking place in the Marble Hall.