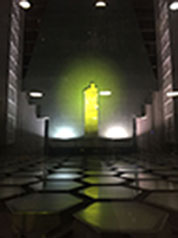 The world is currently obsessed with mid-century interiors. From Elle Decoration and Living Etc. magazines to the interiors pages of the national press and even on Grand Designs, the retro chic of the 1950s is regularly featured.

When it comes to live events, organisers in search of a venue with a funky 1950s’ vibe will find that central London’s Congress Centre is the genuine article. The listed building is a rare example of 1950s’ modernist architecture, with many original features including beautifully restored wood panelling, original light fittings, quirky lifts and a striking statue in the central courtyard by the world-famous pioneer of modern sculpture, Sir Jacob Epstein. An exceptional original space-frame ceiling enables Congress Hall (the venue’s large conference hall which seats up to 500) to be flooded with natural daylight without glare, with air conditioning, a contemporary stage set and state-of-the-art AV equipment ensuring that it’s also comfortable and bang up to date. (Full blackout is also available if required).

Throughout the venue, original features blend effortlessly with hi-tech equipment to deliver stunning and highly flexible event spaces with a vintage twist, something that location scouts for TV and film companies have been quick to discover in recent years.

Indeed, Congress Centre was used as a location for the new movie Our Kind Of Traitor, an adaptation of John le Carré’s novel from a script by Hossein Amini, starring Ewan McGregor, Damian Lewis and Naomie Harris. According to Adam Richards, Supervising Location Manager on the film, “We wanted to give our world of MI5 a more contemporary feel, rather than stuffy establishment which is how it is normally portrayed, and Congress Centre fitted the bill perfectly with its striking modernist spaces.”

Fitzrovia-based film and TV production company Big Talk Productions has also recognised the merits of the venue and has held numerous script readings at Congress Centre including Man Up starring Simon Pegg, Youngers, Friday Night Dinner and Our Men as the location is only a short walk from its office.

The venue is also popular for meetings and larger conferences too, with BBC Worldwide among the many clients to hold events at the venue. It held an event for 170 members of its UK team to update them on quarterly progress. The event took place in Congress Hall, the largest space at the venue, which was set up cabaret style for the occasion. The BBC made full use of Congress Centre’s state-of-the-art built-in AV equipment and according to Charlotte Henwood at BBC Worldwide, “The event went really well from start to finish. A big thanks to the staff for making it run smoothly. James the technician was great, the catering was delicious and the space worked extremely well for our needs.”

According to Robert Girvan, Centre Director at Congress Centre, “The venue seems to have captured the attention of a number of film and TV production companies recently. We seem to be ticking the boxes when it comes to location, hi-tech facilities and the fact that Congress Centre has a contemporary feel with a quirky vintage vibe.”

The venue, which offers a choice of 16 flexible conference and events spaces for 2-850 people, has also been proving popular with blue chip corporate clients. In recent years it has welcomed Apple, Microsoft, Samsung, Hobbs, Coutts, Barclays, Yahoo!, Sainsbury’s, Starbucks, John Lewis and many other leading companies.