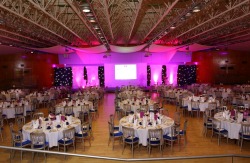 2016 has been a terrific year at Congress Centre and we’d like to thank all our loyal clients, suppliers and friends for your much-valued support. Here’s a quick summary of events during the year:

2016 kicked off in style when we officially became one of Marks & Spencer’s preferred suppliers and hosted their week-long International Buying Fair which was a great success.  The year then continued at a pace and saw us hosting a large number of conferences, meetings and special events for a wide range of corporate clients, along with numerous events for NHS providers and GovNet.​

In the spring we became the only known conference and events venue in the capital to embrace the principles of leading chefs Jamie Oliver and Hugh Fearnley-Whittingstall in their campaigns to put an end to needless food waste and promote ‘wonky veg’.

After a hectic summer, September saw us enter the glamorous world of high fashion when we hosted design duo Vin + Omi’s fabulous fashion show during London Fashion Week. The show featured a host of celebrity models and we even made it onto the pages of Vogue (albeit the online edition!) as a result. Square Meal’s Venues & Events magazine covered the event in a fantastic 4-page feature. In September, we also welcomed L’Oreal to the venue for the first time and were delighted to pick up some beauty tips during their Lancôme roadshow.

Over the course of the year we’ve also welcomed many associations to the venue including The Association of Online Publishers who held a 2-day member event with us in October.

We’re currently enjoying the festive season and look forward to a well-earned rest between Christmas and New Year when the venue will be closed.

Wishing you a very merry Christmas and a happy and peaceful 2017!