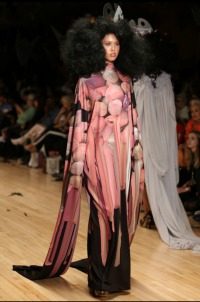 Congress Hall, the largest space at Congress Centre, was transformed for the event with hundreds of large black origami birds suspended from the original 1950s’ space-frame glazed ceiling, which had been blacked out for the occasion. Black drapes were hung from the walls and giant black flower sculptures were installed to stunning effect, whilst dark red lighting succeeded in creating a contemporary gothic mood.

Vin + Omi are renowned in the fashion world for their fantastical, innovative and futuristic pieces, worn by everyone from Michelle Obama, Beyoncé, Grayson Perry and Pamela Anderson, to Jo Whiley, Debbie Harry and Jane Horrocks. However, in addition to the expected outlandish outfits, the show featured many highly wearable pieces, including stunning dresses adorned with handmade flowers and ruffles, and exquisite silks printed in bold floral designs.

According to Vin: “The show was a huge success and succeeded in attracting all the key buyers, bloggers and fashion media we hoped it would, as well as a host of celebrities who came to watch the show. [The show was subsequently featured in a wide range of national, international and online media including Vogue, The Daily Telegraph and The Daily Mail]. Congress Centre leapt out as the perfect venue for the show as it has the right proportions, facilities, location and excellent staff. In order for us to have the confidence to transform a large space into a catwalk environment we needed the full support of the venue and Congress Centre’s staff have been wonderfully open-minded and supportive. Without this cooperation, great events cannot happen!”

In addition to Congress Hall where the main show took place, the celebrity design duo booked the Congress Suites (four interconnecting rooms next to the Hall) to house the large backstage team of 150 people required for hair, makeup and nails.

Ruby Chagger, sales & marketing manager at Congress Centre says: “It was amazing to see Congress Hall transformed for the event in such a creative way. The venue is already very popular with blue chip clients for large conferences and meetings, but it’s not every day we see it in such a fabulous guise.”

For further information on London’s Congress Centre or to book a site visit please call 020 7467 1318 or visit www.congresscentre.co.uk.